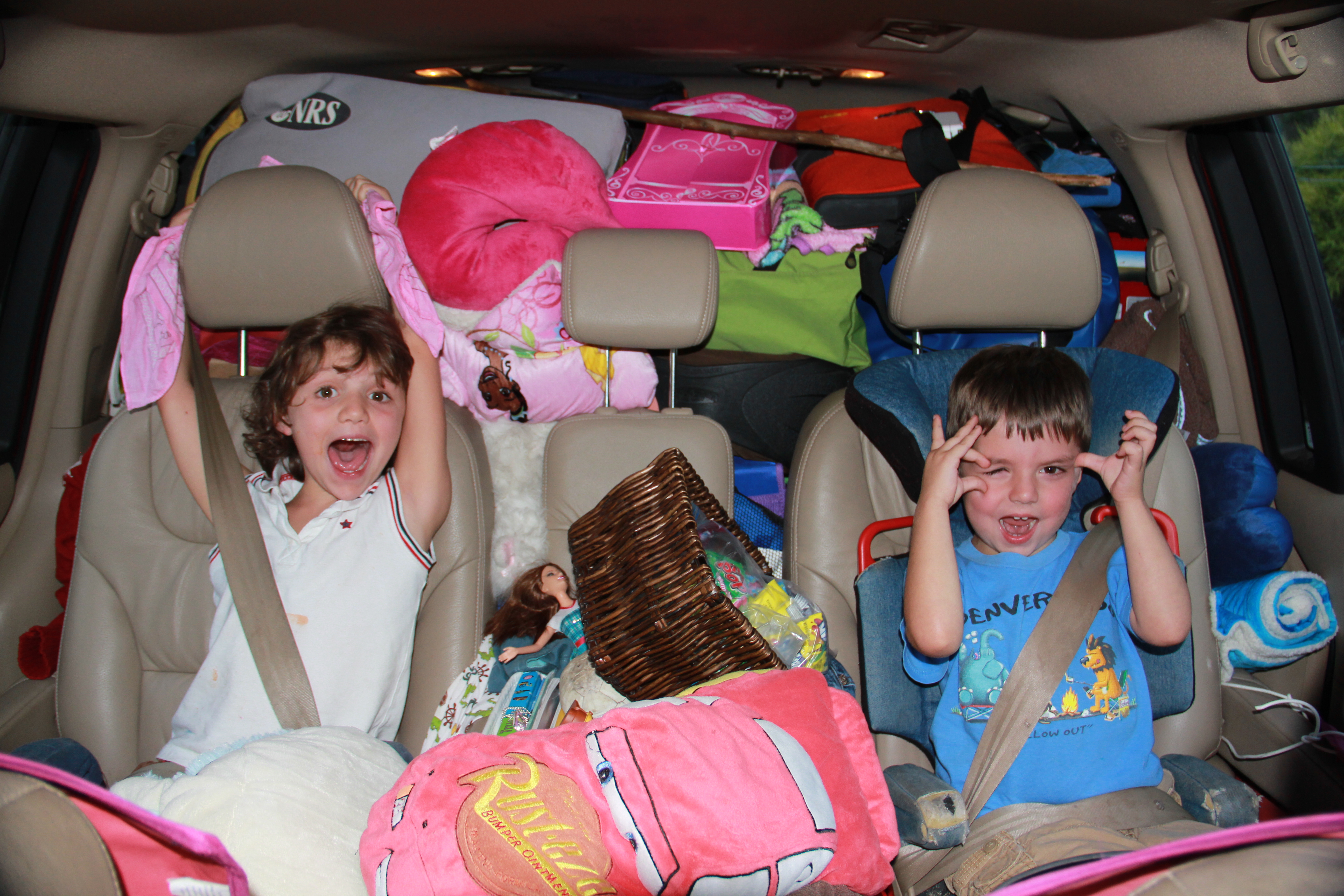 Why do I do this to myself? How do I so easily forget? It hasn’t been a full month since I took my kids to the Gulf Coast for Spring Break and I almost cried tears of gratitude when we finally made it back home.

I wrote about it. I even read my own article, in the newspaper and online, and still I forgot how hard it is to be away from home with three children under five years old.

I think it’s the Idiot Mom Gene, the same gene which allows any woman to be pregnant more than once. The Idiot Mom Gene let me forget how sick I was when I was pregnant, how difficult labor was and how horribly demanding breastfeeding was. Apparently, the Idiot Mom Gene is also responsible for my short term memory lapse.

My husband had to stay in Mississippi to work another day, so on Thursday morning I got up extra early, packed the car and my kids and headed for Birmingham to visit our families. I packed all of the essentials within arm’s reach, bottles, juice cups, DVDs, Pop Tarts and the ultimate road trip shut up snack…cheese curls.

My kids rarely eat Pop Tarts so they were more than excited to have a treat for breakfast. Aubrey, my five-year old, and Emma, my three-year old, were munching happily on their breakfasts when Sadie began crying, “Mine! Mine!” This is her 16-month old way of saying, “Hey woman! Do you think I’m blind? Give me what they have!”

I broke her Pop Tart into four pieces and began passing her small portions. I could hear her smacking away for several minutes at a time, and then she would yell, “MORE!” and I would pass her another morsel.

I was optimistic. Everyone seemed happy, calm even, as we made our way East. I ignorantly thought I could pull off our road trip without a hitch until we stopped for gas in Columbus, Mississippi.

I began pumping gas and opened the back door of my car to change Sadie’s diaper before taking the older girls to the restroom. My heart lurched. Sadie grinned her gap-toothed baby grin as I took in the strawberry jam she had slathered all over her body. Not only was she covered with the filling of her pop tart, but Emma had lovingly sprinkled her little sister with shredded wheat. It had the same effect as though I had dipped my baby in honey and rolled her in sand.

“Oh, my word,” was all I could manage as she reached for me with chubby fingers caked with Pop Tart puree and shredded wheat confetti.

I left her strapped in her car seat and went to ask the gas station attendant for the key to the restroom, which was out of order. Gas station bathrooms are no friend to a toddler mommy, so I wasn’t extremely disappointed but Aubrey and Emma were beginning to need to use the restroom and I had to do something with my life-size gummy bear.

“Ooooo, Momma! You are not supposed to do that!” Aubrey chimed in helpfully.

“Go to the bathroom and don’t touch anything,” I snapped.

There was no changing table in the bathroom so I decided in lieu of laying Sadie in the bathroom floor at a discount shopping store I would take my naked baby to the car for a fresh pair of pants. We wheeled back through Fred’s and to the car.

Aubrey and Emma climbed into their seats as I laid Sadie on the only empty space in the car…the driver’s seat. After I changed her, I realized the straps of her seat were too sticky for me to put her back with her fresh clothes. I left her sitting in my seat as I grabbed a handful of baby wipes and began scrubbing off the sticky strawberry jam.

I was trying to hurry for several reasons: we needed to get back on the road, and I really didn’t want her “going rogue” in the front seat, flipping switches, knocking the car out of gear, or more importantly, grabbing the bag of Cheetos out of the passenger seat. We needed those for later. We were only an hour away from home. If the older girls saw them I would be forced to play my Cheeto card too early, and we would be in deep trouble two hours down the road.

I was frantically trying to clean the crumbs out of her seat as my phone began ringing repeatedly. I reached for my phone and said, “Hello,” as two things happened simultaneously.

Sadie picked up a large glass of ice water, dumping it all over her lap and my seat, and my husband said wickedly in my ear, “Are you there yet?”
I did the only mature and responsible thing I could do. I hung up the phone without saying one word to my husband, put Sadie in her now clean car seat, folded a baby blanket to place in my seat and left Fred’s on two wheels.

I realized I was only an hour and half into a weekend long trip and I grabbed my trusty notebook I keep with me at all times to jot story ideas and wrote, “Never leave home again, you idiot.”

Robin O’Bryant is a syndicated humor columnist and stay-at-home-mom to three daughters born within four years. She finally figured out where babies come from and got herself under control. Her first book, “Ketchup is a Vegetable and Other Lies Moms Tell Themselves,” is rated #1 by reader reviews on Amazon in two genres: Humor Essays and Parenting & Families. Visit her at www.robinschicks.com. Robin’s Chicks to learn helpful tips such as: how to breastfeed behind your back*, how to talk to your daughters about man parts, and how to write a proper gold fish obituary.

*Only applies to lactating women with a DD cup or larger.