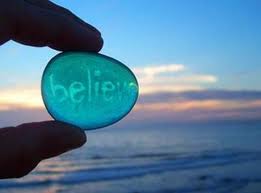 The Magic of Believing

This time of year is tough for parents of seven, eight, nine year olds who have kept alive their children’s belief in Santa Claus. Whether Santa, the tooth fairy, the Easter bunny, monsters, gnomes, or super heroes, children seem to need to believe in something magical, something they cannot see or touch—even when it is fearsome monsters. Little children feel powerless in their world of large people who shove them around like pawns on a chessboard. Identifying with super heroic figures helps them feel powerful. New cognitive understanding brings the elementary aged child face to face with logic, putting at risk the magic of Santa et.al.
My oldest child caught onto Santa when he was nine and his reasoning could no longer overlook the little slips that Santa made come Christmas morning. But he never let on to his little sister, remembering the magic of belief. When she was five, she asked her father if there really was a Santa. Anxious to be done with the “lie”, as he saw it, he said, “No.” She answered with a disbelieving, “Really?” He said, “Well, what do you think, Molly?” She replied confidently, “Oh, I think there is.”

When she was nine, she greeted me one morning holding up an old tooth she had found. I panicked. After putting it to the test the night before, unbeknownst to us, she accusingly asked, “You’re the tooth fairy aren’t you?” Busted. Then she asked the dreaded question: “If I ask you a question will you tell me the truth?” I told her I would, knowing what was coming. “Is there really a Santa Claus?” “No,” I said. She flung herself dramatically onto the bed and cried, “And I suppose there’s no Easter Bunny either!” There it was. All three dashed in a matter of minutes.

Then came the anger. “You lied to me all these years!” With compassion for her inevitable grief, I said, “Molly, do you wish you had never believed in Santa?” Her tears flowed as she said, “No.” She had crossed the line. Acceptance sunk in. She was no longer able to maintain her childish beliefs but she knew the magic of those beliefs.

We must never abuse the power of a child’s belief by using it to our advantage. “You’d better do what I say or Santa won’t bring you any presents.” Santa’s list of “naughty and nice” can be a tempting tool in the moment but can do serious damage to a child’s developing capacity for faith. Santa, the tooth fairy, the Easter bunny, imaginary friends, whoever your child endows with life and love, should never be wielded against them.

The capacity to believe in something you can’t see or touch—from trusting a friend’s loyalty, to a higher power in oneself, to the invisible bonds of family, to hope for the future–belief is a necessary quality to surviving and thriving in a roller-coaster society. A child’s eager belief in something as illogical as Santa, monsters, the tooth fairy or a giant rabbit shows a developmental need and desire to believe in something beyond the human spectrum. We can all learn from the purity and loyalty of a child’s beliefs.

Fairy tales have survived for centuries because they validate a child’s fears and imagination. Be sure to hold carefully your children’s beliefs, even if they are inconvenient. Perpetuate their capacity for make-believe because their growing imaginations need to take them far. They will believe as long as they need to—often beyond a sibling, friend or even parent telling them otherwise. Gracefully allow them to grieve and then graduate, to cross that line into the knowing when they’re ready, so they can become keepers of the secrets for their children.

My opinion has provoked responses from many parents who view the Santa myth as a lie and either do not perpetuate the belief or keep Santa in the world of pretend. There is no right or wrong and each family must choose what feels right to them. As devastating as learning the truth can be, making the switch from fantasy to reality happens in so many areas of life for a child. I like the way Molly put it. “Learning “the truth” about Santa represents a stage of development of moving from a simplistic understanding of a cultural myth to a complex understanding of why that myth exists and what it represents for us.”

One thing is for sure. A lot of buttons get pushed around the subject of Santa. I wonder if some of the nay-sayers had parents who used Santa as a threat for good behavior. Certainly learning the truth under those circumstances would feel like a betrayal.

If you keep Santa alive in your house, keep him in the world of magic so your children will cross the line with the memory of the joy of believing.

Bonnie Harris, MS Ed, director of Connective parenting, has been a child behavior and parenting specialist for twenty-five years. based on her highly acclaimed books, When Your Kids Push Your Buttons and Confident Parents, Remarkable Kids: 8 Principles for Raising Kids You’ll Love to Live, bonnie counsels parents via phone and skype, teaches parenting workshops, leads professional trainings and speaks internationally. The mother of two grown children, she lives in new Hampshire where she founded The parent guidance Center. To learn more, visit her website at www.bonnieharris.com.