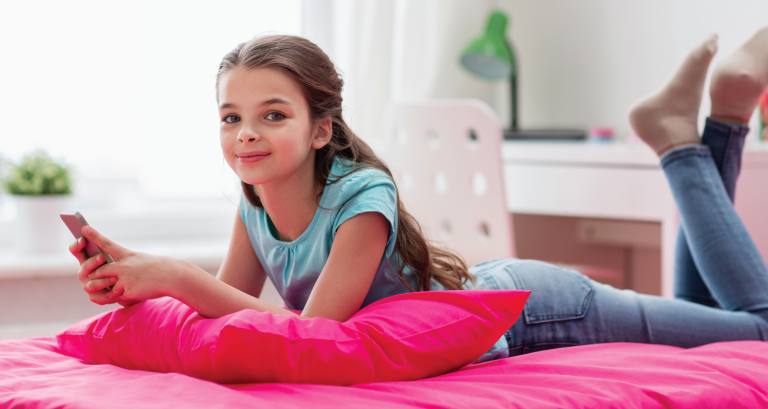 “I can’t believe my daughter is old enough for a cell phone already. I’m scared. How do I keep her safe? Am I worrying too much?”

You’re not worrying too much.

Research shows that virtually all kids who are allowed to keep their cell phone in their room overnight will answer a late-night text, and most of them have spent at least some late nights sending texts.

Only 4 percent of parents believe their teens have ever texted while driving, while 45% of teens admit that they routinely text while driving.

Only 11 percent of parents suspect their teens have ever sent, received or forwarded a sexual text or photo, while 41% of teens admit they’ve done so. Studies show that the pressure to send “sexy” photos via phone (sexting) begins in the fifth grade, on average. The average age of first pornography exposure is around age 8.

Half of all kids say they are addicted to their cell phones and worry that they use them too much. Their parents agree, and 36 percent of parents say they have daily arguments with their children about their phones.

Our own experience tells us that it takes a fair amount of self discipline to manage the responsibility of a mobile phone. Most kids are not ready for that responsibility before middle school, if then. In fact, since the prefrontal cortex is not fully developed until the mid-20s, middle schoolers are famous for not having as much impulse control as we’d like. Middle schoolers have a hard enough time managing the temptations of social media, sexting, and addictive games on computers. Handing them a phone that they can use constantly, without your supervision, is like handing a child an addictive substance and then not monitoring them.

So it’s natural to worry when your child is ready for her first cell phone, even if you think he or she is generally responsible. Yes, this device is an instrument of connection, and it will allow you and your child to be more connected when you’re apart. But it’s also a symbol of separation, a reminder that your child is now spending enough time at a distance from you – and other supervising adults — to need it. Worse, it’s a reminder of the dangers lurking in the outside world that could menace your child, without you there to stop them.

The problem isn’t with kids today. In fact, the research shows that teens today are more responsible than my generation was in driving, drinking, sexuality and drug use. No, the problem is that smart phones pose new risks.

Luckily, communication and supervision can dramatically lessen the risks. How?

1. Don’t give your child a phone too early.

If your child is with a trusted adult, he shouldn’t need a cell phone. It’s when kids start to walk to school by themselves, or otherwise are without supervision, that they need a cell phone for safety reasons. The younger your child when she gets the cell phone, the more you’re asking of her, because it will just be harder for her to act responsibly with it. Can you trust that she’ll follow your rules about which apps to download, for instance? How often does he lose things? Some parents give their younger child devices that are more limited than a smart phone, that can’t be used to go online, or to call anyone not authorized by the parent.

2. Agree to rules, before that first cell phone.

Most parents think a “contract” with their child is unnecessary and silly. But a written agreement is a great way for your child to step into this new responsibility without you “over-parenting.” When that first cell phone comes with written rules and responsibilities in the form of a signed agreement, young people learn how to handle them responsibly. If you ask your kids what they think the rules should be, and negotiate until you’re happy, they will “own” those rules. For a starting place, check out the suggested rules at the end of this article.

You know how when a building goes up, there’s a framework around it? Once the building is complete, the scaffolding is unnecessary. Your job is to give your child support –like scaffolding — as he learns each new skill.

So don’t just buy a cell phone, give a lecture, and hope for the best. Instead, see this as a year-long project. In the beginning, plan to talk with your child every single night about his mobile use that day. Review with him what calls and texts came in and out, what apps he used. Ask how it felt to him to use his phone. Did it change anything in his life to have those calls and texts come in? Were there any challenges as he considered how to respond? When you see a mean text from one friend about another one, you’ll have the perfect opportunity to ask him about social dynamics, listen to the dilemmas he’s facing,

and coach him about how to handle these challenges. Even once your kids have had a phone for awhile, I recommend that parents reserve the right to spot check their messages and texts occasionally without warning. Erased messages should be checked on the bill. This gets kids in the habit of being responsible, because their phone use doesn’t feel so “invisible.”

At the dinner table, comment on news stories that involve cell phones, from sexting to dangerous apps to driving deaths. Ask questions about what your child thinks, and listen more. You might find, for instance that your teen thinks sending nude selfies via Snapchat is fine because the photo will self-destruct. But does your child realize that the receiver can take a screenshot, and that there are now apparently ways to subvert the auto-notification that should tell the sender a copy has been made? And does your child know that having a photo of a naked underage person on his cell phone is illegal?

When a young person is faced with a new situation, how will he know what to do? Roleplays may be hokey, but they give your child a chance to think through the situation and his options. By planting those seeds, your child has more resources to act responsibly in the heat of the moment. I’ve often launched into parent-child roleplays about the topic of the day to help my child consider various responses, for instance pretending to be a friend asking “Hey, send me that photo you took at the sleepover!”

1. Never write or forward a photo, or anything in a text, that you wouldn’t want forwarded to everyone in your school, your principal and your parents.

Remember that everything you send can become public.

2. Always ask before you forward a text or photo.

Be respectful. How would you feel if someone forwarded an unflattering photo of you?

3. Always ask before you take a photo or video.

Even once someone has given you permission to take a photo, ask before you post it.

4. If someone asks you to send a sexy photo…

…remember that even with Snapchat (which “evaporates” the photo), the picture can be copied and forwarded to others. Anyone could see it — every kid in the school, your teachers, your parents. It happens all the time to great kids. Just don’t send it. And talk to your parents about it.

5. If you receive a sexy photo…

… immediately delete it from your phone, tell your parents, and block the number so you can’t receive more. Possession or distribution of sexual pictures of people who are underage is illegal. If the person who sent it to you asks why, just say “It’s illegal. Let’s talk instead.”

…on Facebook, or broadcast it beyond your friends (because it leaves you open to stalking.)

…except in a direct text to friends (because it leaves you open to stalking.) Don’t use location apps that post your location.

9. If you receive an unsolicited text, that’s spam.

Don’t click on it. Instead, tell your parents so they can report the problem and have the caller blocked.

11. Don’t spend your baby-sitting money all in one place.

You don’t need more ringtones. Get unlimited texts so you don’t have to worry about budgeting.

12. Don’t wear your cell phone on your body

…and don’t use it if you can use a landline. Cell phones are always looking for a signal, and that means they’re sending out waves that you don’t want going through your body. Cancer? Maybe. We don’t know enough yet. So why not just be cautious?

13. Set up your charging station in the living room

…so your phone is not in your room at night.

14. No cell phones at the dining room table.

15. No cell phones out of your backpack while you’re in class.

And of course turn the sound off.

Don’t feel obligated to respond to texts right away and don’t text until homework is done, during dinner, or after 9pm.

…and put it in a bag where you can’t reach it in the back seat. (Make sure you have directions before you start out.) Cars kill people.

If a “friend” sends you a mean message, take a deep breath and turn off your phone. Talk to them the next day, Face to Face, about it. Never say anything via text that you wouldn’t say Face to Face.

Our brains get a little rush of dopamine every time we interact with our phones, so every text you send or receive, every post or update, feels good. Why is that a problem? Because it can distract us from other things that are important but maybe not so immediately rewarding, like connecting with our families, doing our homework, and just thinking about life. To prevent addiction, make sure you block out time every day — like while you have dinner and do homework — when your phone is off. If you feel like that’s too hard, talk to your parents about it and ask for their help. There are programs that prevent your phone from being used at times you designate.

Bio:
Dr. Laura Markham is the author of Peaceful Parent, Happy Kids: How to Stop Yelling and Start Connecting. She earned her Ph.D. in Clinical Psychology from Columbia University and has worked as a parenting coach with countless parents across the English-speaking world, both in person and via phone. You can find Dr. Laura online at AhaParenting.com, the website of Aha! Moments for parents of kids from birth through the teen years, where she offers a free daily inspiration email to parents.