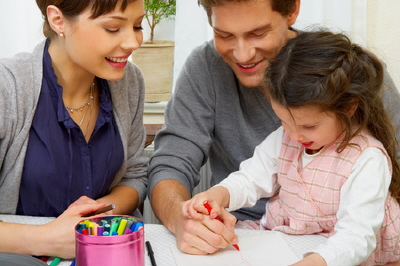 Ah, parenting wisdom, like a good parking spot in San Francisco, it’s all around us, yet can be so elusive. You gotta’ keep your mind, eyes, and ears open, peeled, and clean. Sure luck plays a role. But as a successful coach (Darrell Royal) once said, “Luck is what happens when preparation meets opportunity.” To that point, I just want to share two nuggets I was fortunate enough to pick up on my final two days at Studio Grow. For as the esteemed American poet Robert Hunter once observed, “Once in a while you can get shone the light in the strangest of places if you look at it right.”

Before I begin, let’s give the story some context and make sure you know about Studio Grow.  It’s a children’s playspace with three locations in the east bay (Berkeley, Concord, and Danville). Yelpers have coined it “awesome” and “amazing” so let’s go with their words since mine might appear biased. I’m a co-creator along with my brother-in-law. We are dads and saw the need for a place where families could go and have their children express themselves creatively and be inspired to build, play, dance, sing, tumble, climb, read, and draw. An “all-in-one” stop if you will. If you have little ones, be sure to check it out in person asap and visit the website to learn more about camps, baby-sitting, parties and more!

Earlier this year, I was sitting at the front desk in Concord, when a mom entered with her little girl. She explained that it was their first visit, they were meeting a friend, and they would prefer to wait at the front until their friend came. They sat and looked out the window together, casually talking and observing. A few minutes later, a car pulled in and they were excited to announce their friends had arrived. Everyone greeted each other, quickly got settled, and prepared to enter the playspaces together.

The mom and the girl who had been waiting rushed inside, eager to play and explore. Suddenly, the two-year old boy who arrived second, noticed blocks on the front table and was compelled to stop and build. I watched, fully expecting his mother to hurry him along to play with their friend who had been waiting to meet them. Instead, the mother smiled and said, “You want to stay here?” The boy did not answer. Just kept building. Then the skies parted, sunlight beamed through the windows upon the young mother and child (creative embellishment to draw attention to the climax of the story), she knelt down next to him, smiled, and said, “Take your time.”

Just three words, but in six years at Studio Grow, I had never seen anything so powerful.

She wasn’t “spoiling” him or giving him too much authority or autonomy, or “overparenting” or any of that nonsense. She was calm, attentive, enjoying her child and the moment, following his interests, and gently narrating his actions – just little sprinkled observations. I gave her sincere props which she eagerly and graciously accepted. (This stuff is draining and thankless as you know).

We all can learn from her. Let’s make an effort to smell the roses, and get the phrase “take your time” in our parenting palaver. It’s a good lesson and phrase for both children and parents in today’s frenzied world. What say we also make an effort to openly commend each other when we notice another parent giving their all or teaching us something worthy? We’re all in this together and it takes at least a village.

The very next day, I was at the front desk in Berkeley when I overheard a less than two-year-old child hiccuping in the lap of her caretaker. Her nanny, let’s call her Anna (that’s her name, so… makes perfect sense), naturally and kindly offered her some water. The child reacted dramatically, pushing the sippy cup away and protesting with defiant grunts of displeasure. Anna calmly explained, “You don’t want the water? You don’t need to do that. Just say ‘No thank you’.” She modeled the “No thank you” in a clear, matter-of-fact manner.

The entire delivery of the valuable lesson was confident and direct, without a hint of anger or disappointment. I couldn’t help but commend her efforts. She explained that she has worked at the YMCA for ten years and that “people don’t realize that 18-month-old children can learn things like that.” I told her she was preaching to the choir and that I would share her story in the hope that our choir would someday grow.

Won’t you join us? Let’s teach our children how to communicate effectively and respectfully. Let’s sing it on top of the mountain! The next time your child reacts to anything with any kind of verbal or nonverbal drama (or mild to severe hysteria), calmly explain that we don’t have to do that, and give her the exact words she was missing.

Like the mom in the first story, take your time. Like Anna, deliver the lessons with confidence and amazing grace. Let’s build a village, one step at a time.

Tom Limbert is a published parenting author and Parent Coach and can befound online at www.parentcoachtom.com. He has been working withyoung children and their families since 1992. Tom has a Master’s degree in Education with an emphasis in early childhood development and is the co-creator of Studio Grow. Tom’s book, Dad’sPlaybook: Wisdom for Fathers from the Greatest Coaches of All Time, has over one hundred inspiring quotes and includes a Foreword from Hall of Fame QB Steve Young.