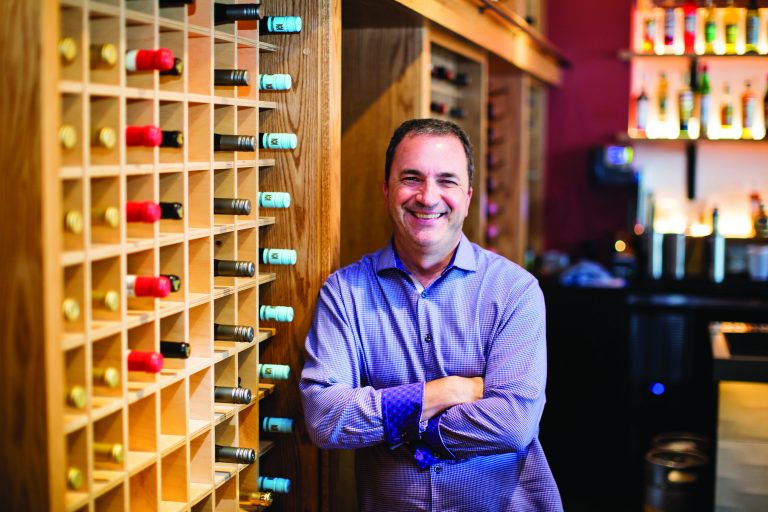 So many new restaurants popping up these days throw around the same familiar descriptions;  “farm to table,” “sustainable,” “local” “fresh” and “organic.” We see and hear these terms so often that they have, unfortunately, become somewhat cliche and meaningless — something you now almost expect to see but don’t put much consideration or clout into. There is a local neighborhood restaurant, however, that lives up to these claims wholeheartedly, and deserves recognition not only for its innovative, delicious cuisine, but its earnest commitment to serving the best local and sustainable products available.

Sabio on Main, tucked behind Starbucks in downtown Pleasanton, is a popular and stylish two-year-old bistro serving a hybrid of Spanish and California-style cuisine. Owner and longtime Pleasanton resident, Jim McDonnell, chose a Spanish/Tapas inspired restaurant because, he says, as an avid traveller and lifelong “foodie,” the cuisine of Spain is one of his favorites. McDonnell says he recognized a gap in the downtown Pleasanton restaurant scene, and sought to fill it with a modern, upscale version of his favorite tapas restaurants. He says the concept of small plates and innovative drinks “lends itself to a much more fun and comfortable way of experiencing food.”

The concept proved to be a fruitful one. Loyal locals flock to the chic happy hour scene ($1 oysters, artisan cocktails) and date-night couples seek out the innovative menu, thoughtful wine selections and stylish ambiance reminiscent of a San Francisco or other “big city” establishment. While many customers appreciate Sabio for offering an appealing alternative to the local dining scene, it’s what happens behind the scenes that really sets the restaurant apart.

Executive Chef Francis Hogan is deeply committed to sourcing only sustainable, local produce and animal products for the restaurant. He sought out local urban farm Baia Nicchia, located in the Sunol agpark, to source local produce, and he developed his menu to highlight those products. His relationship with the farm and its majority owner, Fred Hempel, has developed into something quite meaningful, and Chef Hogan has even invested some money in the farm himself. In Hempel’s experience, Sabio is “one of the only restaurants in the area that really cares where its ingredients are from.”

The farmer established his small farm, Baia Nicchia, which means “Bay Niche” in Italian, in 2006, with the intention of breeding tomatoes specifically for cooler Bay Area climates . He says that while the “breeding focus has changed now, our niche is still the Bay Area.” Says Hempel, “We met with the folks from Sabio prior to them opening, and they have been a valued customer and collaborator ever since.”

So much so, that the farmer and chef Hogan have been working closely together over the past few years to develop an exclusive new proprietary tomato, a type of hybrid green tomato. Currently, the pear-shaped tomato is nicknamed around the farm as a “hard-ripe” tomato, named for the fact that it doesn’t soften on the vine or turn mushy when picked, but maintains its crisp exterior. The striped green tomato does, however, develop a ripe, fleshy interior with a flavor that Hempel suggests as containing “hints of plum.”

The tomato is currently being showcased on the Sabio menu in a beautiful and vibrant  “Sunol Tomato Salad,” and was featured in last year’s menu as an accompaniment to a Liberty duck breast entree, simply marinated to showcase its unique texture and tart, sweet flavors.

Much of Baia Nicchia’s other specialty produce can be seen on the menu, from delicate purple chive blossom flowers garnishing Smoked Sturgeon deviled eggs, to char-grilled summer squash with harissa vinaigrette. And many of the unique, artisan herbs found on the menu can be accredited to another farm located in the Sunol Agpark, named Jellicles Farm. “Herbs that you don’t necessarily see every day,” says Hogan. “Less the parsley and cilantro, more the anisisop, marigold and calendula — things like that.”

While most all of the menu items, including meat and seafood, can be traced to local farms and fisheries within 50 miles of the area, one of the ingredients that isn’t currently on the menu may be even more telling of Sabio’s commitment to sustainability.

“We are not serving salmon this year,” explains Hogan,” because the local season experienced a lot of trouble, so it’s actually closed right now. We cannot get California King Salmon.” Salmon can be found on nearly every restaurant menu in the area, and it’s an extremely popular choice, so the commitment to not serve the fish was a difficult, but necessary one, says the chef.

“They (the fisheries) are taking a proactive approach to not hurt the population of fish, so we’d rather not serve it. We are not going to serve a poorly farmed product. We are on the California coast and we have gorgeous product, so it doesn’t make sense to bring in something halfway across the world.”

Chef Hogan works with “Water2Table,” a local SF based fish distributor, to source all of the seafood on his menu, because, he says, he’s tired of the deception surrounding seafood served in restaurants. “There’s really no rules or regulations on what you call something. A lot of times you could be eating what you think is one thing but it’s really something else.”

Getting 100% of their seafood from one small, local region is challenging, but not impossible, says Hogan, because “fish, like everything else, is seasonal.”

“So right now,” he says, “it’s pretty easy because there are so many things swimming – the local petrole, the black cod, and the local halibut – which is beautiful.”

One seafood dish currently found on the menu which Hogan says truly embodies the spirit of Sabio is the Escabeche, featuring local Monterey Bay calamari, along with mussels, shrimp and Sonoma Sea Bass, prepared in the traditional Spanish method — marinated with vinegar and olive oil, and served chilled, with toasts. It’s a dish that’s not only delicious, but completely sustainable and local.

“We don’t just talk to talk,” says McDonnell. “We are going the extra step top get externally certified and audited (by companies such as ‘Good Food 100’ and ‘Eat Real.’) In order to do that, we have to be sourcing our products from people we trust.”

McDonnell’s goal is for the restaurant to be fully transparent and certified. He says that while grocery products must go through rigorous auditing to have labels such as “Organic” or “Non-GMO,” restaurants are currently not held to the same standards.

“How do you know when you go into a restaurant that something is what it claims to be?” he asks. “We believe that the restaurant industry should evolve to the same level of transparency that grocers have.”

It’s a lofty goal, but Sabio on Main is already steps ahead of other restaurants in the area to meeting those standards. And although most dining patrons return to Sabio for their delicious and inventive, seasonal menu, the knowledge that their food is coming from the freshest, local sources available should be something to savor and appreciate that much more.