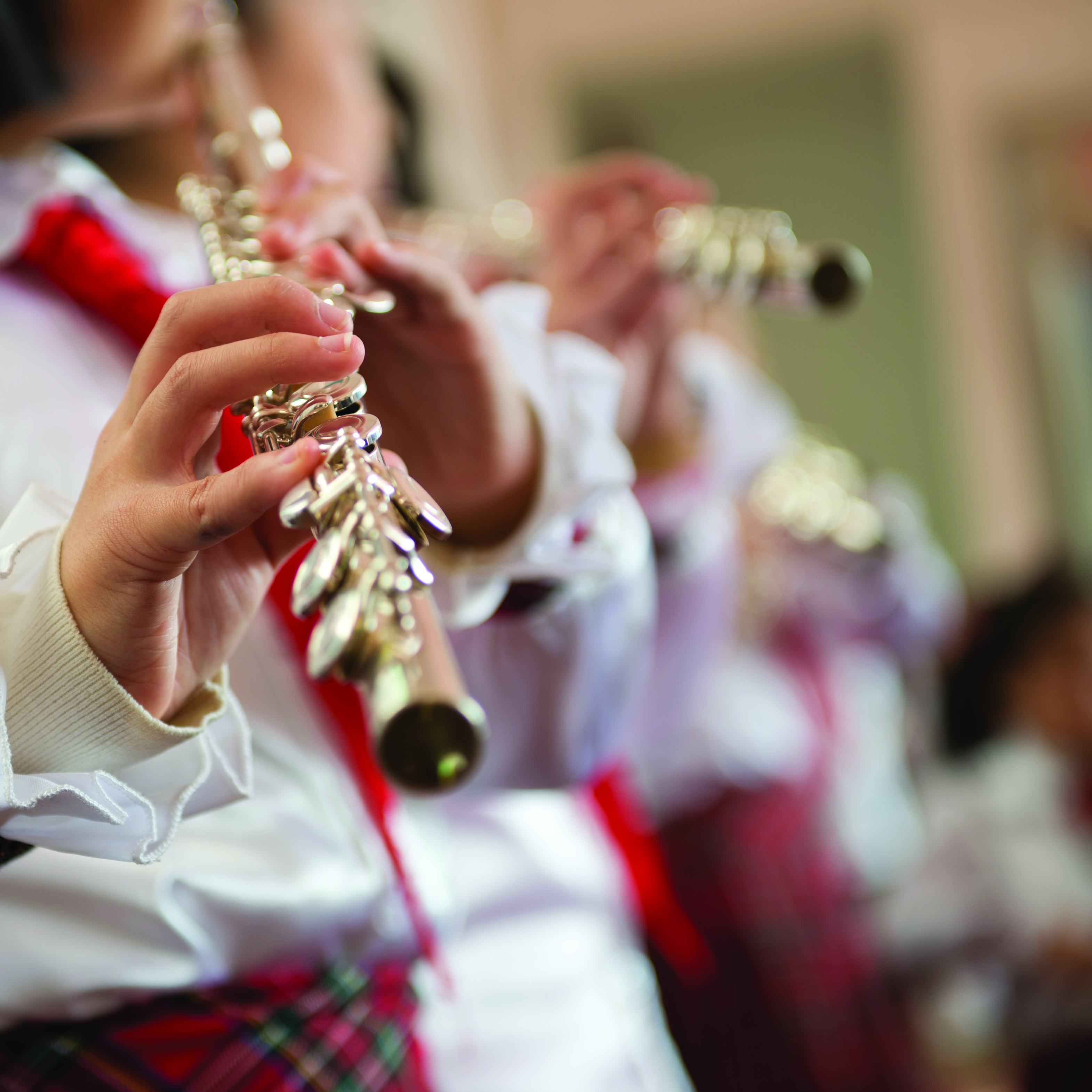 Music Study and the Intelligences

Music Study and the Intelligences

For years, this chicken-or-the-egg question has circulated among educators, but in the last few years neuroscience has responded with a definitive answer:  music study develops better students. Music study develops skills that aid children not only in cognitive intelligence, but in social-emotional intelligence as well.  Musical study produces positive outcomes for students in academics, social environments, and future endeavors.

Music is good for the brain

Research indicates that the brain of a musician, even a young one, works differently than that of a non-musician.  Neuroscience is revealing that children involved in music have a larger growth of neural activity than non-musically trained children. Important regions of the brain that perform higher-level cognitive function are larger in musically trained students.  In fact, the brains of musically trained people are significantly larger in the temporal and frontal cortexes: these are the areas that control hearing and complex behaviors such as abstract thought and planning.

To borrow from the fitness paradigm:  music is a major workout for the brain.  The use of technologies such as functional Magnetic Resonance Imaging (fMRI) and electroencephalography (EEG) are giving us a greater understanding of exactly what happens inside the brain when it processes music.  Imaging shows various areas of the brain light up when subjects merely listen to music; however, when subjects are actually engaged in creating or playing music, the results have been described as “fireworks” inside the brain. This activity involves nearly every region of the brain with every neural subsystem lighting up or firing!  So how do these neural fireworks translate to your child’s intellectual development?

For years, experts believed that playing music wouldn’t actually lead to increased intelligence.  Past test results showing the across-the-board rise in academic scores of music students were attributed to the skill set, including better focus, acquired through musical practice.  New evidence is surfacing that disputes this theory.  In a study by Dr. Sylvain Moreno, lead scientist at the center for Brain Fitness Rotman Research Institute, not only did the music students’ academic scores improve, but also their IQ scores.  Although we know IQ to be relatively fixed, students tested before and after musical instruction recorded a rise in IQ points.  This proved to be true even with beginning music students.

Spatial intelligence is the ability to perceive the world accurately and to form mental pictures; it is the ability to visualize through the ‘mind’s eye’. There is a correlation between music study and spatial intelligence.  Music improves spatial-temporal skills in students over a given amount of time.  Spatial skills allow children to visualize and imagine solutions.  This skill aids in problem-solving such as is required in math.  Spatial skills also aid in solving multistep mathematical problems. It appears that music practice is a perfect adjunct to any mathematically based interests such as: engineering, computer science, gaming, or architecture.  Another outcome crucial to mathematics is a better working memory. This skill allows students to remember and recall details even when the mind is busy.

Language development is influenced by music education. Music impacts brain development by actually wiring the brain’s circuits in specific ways; this effect can be seen on images of the left side of the brain where language processing takes place.  The ability to hear, identify, and break down sounds enable music students to develop better phonological skills.  Children come into this world programmed to decode sounds and words.  Music education allows children to learn words faster, leading to earlier and better reading skills, and the development of a more advanced vocabulary. Music training enhances a child’s natural abilities.  Gains in verbal intelligence have been identified in as few as four weeks of musical training where vocabulary scores dramatically rise and overall literacy improves.  This also can be attributed to the listening skills that are honed through music study.

The relationship between music and language also increases social intelligence in children.  Language competence is also the root of social competence; social competence manifests as pro-social behavior.  Music students are better at hearing changes in tone and distinguishing intonation.   The ability to distinguish intonation in conversation is what allows children the sensitivity to understand the nuanced emotion in conversations.  Understanding the meaning and intent conveyed through the voice allows children to be more empathetic towards others.  Cooperative efforts through group and ensemble work also leads to pro-social behavior.  Collaborative music is a great tool to allow children to interact positively with peers.  Self-discipline gained through music study is also a key outcome.  This quality aids students across all academic and behavioral spectrums.

The benefits of pursuing music education for children are numerous.  Music does develop and engage the intelligences.  Music mastery begets rewards.  Ludwig van Beethoven wrote, “Music is a higher revelation than all wisdom and philosophy”. Yes, music does produce better students; yet, test scores or brain imaging do not as easily measure the greatest rewards of musical study.  Music’s greatest value to our children is its intrinsic ability to capture emotion and serve as vehicle for self-expression.  Ultimately, music is its own reward.

The Growing Room Academy is pleased to offer beginning through advanced music instruction for children of all ages at our beautiful new facility in San Ramon at 23440 San Ramon Valley Blvd.   For more information please call 925-82-5808 or visit us on the web at www.thegrowingroom.org/academy