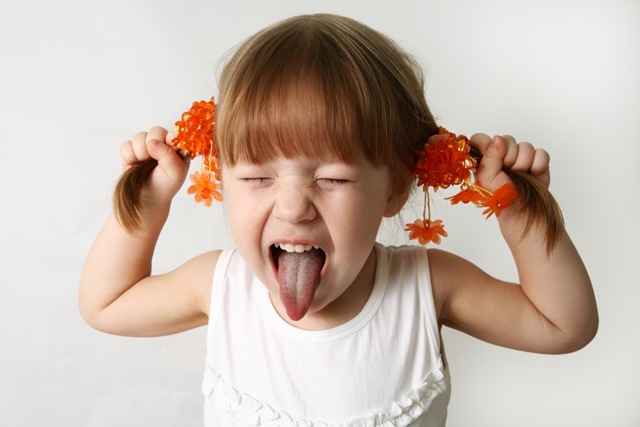 Anyone who’s ever had children knows that children are not dogs. But I’m learning that the lesson is almost the same.

I was once quietly and guiltily confiding in a friend about my daughter’s maniacal aversion to hairbrushes, headbands and barrettes. Coupled with her equally headstrong determination to grow her hair long, we have been reduced to shouting matches more often than I care to admit.

“All of a sudden,” I told my friend of this latest incident, “it was like we were BOTH six years old, and I was yelling at her that I was going to make an appointment to cut her hair off. That’s when I realized I was at the end of my rope and had to walk away.”

My friend didn’t bat an eye. “I have the best conditioner, I use it on my older daughter’s hair or we can’t get a comb through it. And they make tug-proof hair bands, too!” These things didn’t occur to me because I’ve always had short, fine hair. My friend has beautiful, thick hair… like my daughter. My Achille’s heel with my child caused my friend no grief at all.

My relief was palpable, not just from a possible solution to the hair problem, but because she admitted to having a challenging child of her own. The guilt I’d felt over this most recent meltdown was unnerving, particularly because I don’t think I’ve ever felt it with my older child. I’ve never had such a meltdown with him. He simply is not that combination of mercurial, stubborn, and six.

Why do I feel so guilty? Because I get frustrated — when she doesn’t take “no” for an answer, when the toes of her socks have to fit just right, when she wants to wear shorts in the winter and arrange thirty dolls just so before bed. While I’m learning to choose my battles, I get frustrated at my own lack of patience, and I feel guilty because it makes it seem as though I love my challenging child less.

Kids from the beginning of time have accused parents of playing favorites, of loving one child more than another, of treating siblings unfairly. Parents from the beginning of time have lived with the guilt of not loving each child the same. But each child is NOT the same. They’re different. Is it possible to love your children equally, but differently? I think it is.

I love them both more than life — my son, who has always been empathic, sensitive, helpful, loving, and only occasionally stubbornly perfectionist, and my daughter, who has always been moody, argumentative, dramatic, strong-willed, stubborn, and only occasionally affectionate. I didn’t know kids could be that different from each other, especially in the same family… although puppies and wolves are in the same family too.

My daughter is more independent, imaginative, creative, dramatic, focused and clever than I will ever be. Every single element of her personality that now leads us to trouble is just what I wanted her to have as an adult. I don’t want to quash them, or dim them, or stifle them. I just need to be able to handle them at this time in her life, and that’s not always easy — which is perhaps the understatement of the year.

Certainly, it’s not all battles and meltdowns. When she’s not making me crazy, she’s making me laugh. And the occasional hug or unsolicited “I love you, mommy” have become touching beyond belief, because I know that affection is difficult for her. It doesn’t mean she doesn’t love me. It means we’re different, and I need to learn to appreciate those differences so that I can be as good a mother to her as I am to my son — the “easy” one.

My “easy child” is like me. I instinctively understand him, how he thinks. I can predict how he will react in any given situation and plan accordingly. There are few meltdowns, few acts of overt disobedience, few gray areas of acceptable behavior. We “get” each other because we’re similar.

My “difficult child” isn’t challenging because of who she is. She’s challenging because of who I am. I don’t always understand her, or how she thinks, or why she reacts the way she does. I’m also probably a little jealous of her confidence and her unshakable belief in her decisions. Of one thing, however, I am certain: all of these traits are what make her unique and exceptional. I just need to learn how to teach her to use them to be safe and happy.

Fortunately, it’s an ongoing class. And as I tell us both almost every day, don’t worry. Mommy’s signing back up.

By Maggie Lamond Simone. Maggie is an award-winning writer and mother of two living in Baldwinsville. Her book Fromm Beer to Maternity (November 2009), can be found on Amazon.