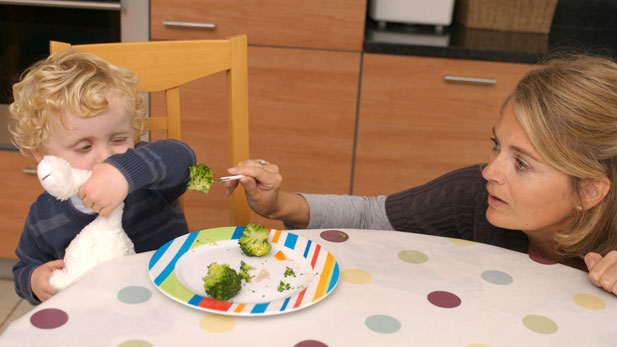 It is often said that arguing rationally with an irrational person is an exercise in futility and never is that more true than with toddlers and their eating habits.  If you live with children, have had children, know anyone with children or have sat next to a table with one in any Red Robin across America, you know that the eating habits of toddlers can only be described with one word:  RIDICULOUS.

I was pretty much caught with my pants down with this whole motherhood thing and toddler eating really threw me for a loop.  I mean, breast feeding was bad enough, what with the whole “shoving my boob in the face of a perfect stranger” thing and the “unmistakable urge to moo as I sat and leaked nourishment” business.  I wore more rice cereal than the Fruit Loops actually ate and to this day, the site of pureed green beans makes me want to barf.  And don’t get me started on how much I hated the smell of baby formula.  I still don’t understand its appeal to the under 12 months set and while we are on the subject, “The Formula” is a stupid name.  I always pictured The Count from Sesame Street announcing “I’m going to feed him The Formula…ah ah ah”.  (Give me a break.

But all of the above, while trying, pales in comparison to feeding a child over the age of a year.  Before the cherubs turn a year, you are still pretty much in charge and there really isn’t much choice:  boob, bottle or green shit.  Case closed.  But, after you hit that year mark and they get teeth, you are then obligated to start feeding them things that are more interesting (read:  solid and not mashed into oblivion).  And, as you progress towards 18 months and beyond, that toddler learns words.  And starts to have an opinion.  And is very vocal about what they will and will not eat.

This part of toddlerhood is AWESOME, I tell you:

I not eat this ha-cause my sock hurts.

I not eat this ha-cause its green.

You get my point.

Fruit Loop #1 was no exception to the It Is Hell To Feed A Toddler Rule.  In fact, I often said he was a fruitarian who occasionally accepted dairy on alternate Tuesdays.  He enjoyed blueberries a great deal, was a huge fan of the Goldfish cracker and if the moon was properly aligned with Venus and visible in the western sky, he’d eat a Yo Baby yogurt (pear flavored ONLY, please).  He drank milk by the truck load and refused any and all other forms of liquid.  So, basically, his diapers were fantastically epic adventures and we single handedly kept the Dairy Farmers of America in business.

Because I’m a control freak and because I simply could not tolerate such a finicky eater, I decided to go to war with Fruit Loop #1 when he was just shy of two years old.  I got tired of being a short order cook and his picky, seemingly schizophrenic reasoning behind his food choices.  I kept flashing forward twenty years to the thought of him in a restaurant demanding the waiter bring him whole milk, cut up pineapple and Gerber Puffs.  And since I REFUSED to serve chicken nuggets at his wedding, things had to change.

I decided the best way to win the war was to trick the little stinker into eating what I deemed healthy. At the time, he was accepting cut up peaches into his repertoire but only from a jar and only on Wednesdays.  So, me, being the brilliant, bachelor’s educated mother that I am, decided to mix the finger food peaches from a jar with finger food carrots from a jar on his high chair table.  Both were orange, slimy, and soaked in pear juice.  He was not so adept at the pincher grasp yet and generally used a sweeping fist to get food into his gullet, so it stood to reason that at least a few carrots would make their way into his stomach.

I mean, what could possibly go wrong?

You can stop snickering RIGHT. NOW.

After I had nonchalantly mixed the peaches and carrots on his tray, I stood back, smirking, to watch the magic happen.  I silently patted myself on the back for a sneaky job well done and high fived myself.  I was going to WIN THIS WAR, bitches!

You see, here’s the thing:  toddlers are NOT stupid.  They have their agendas, know what they like and are determined to make us turn grey in six months.  I’m here to tell you:  they are on to us and our fruit and veggie commingling ways.

Fruit Loop #1 inspected his tray very closely.  Very closely indeed.  After looking at the sight before him, he looked up and caught my gaze.  You could hear a pin drop.  Somewhere in the distance, I heard the jingling of spurs and the sound of tumbleweed.  Battle lines had been drawn.  It was win, lose or draw time.  Hide your women:  Sheriff Mommy was about to face-off with Outlaw Fruit Loop.

Who was going to blink first?

Fruit Loop #1 made the first move.  And it was a bold one.

Without having tasted a single morsel, Fruit Loop #1, silently and still holding my gaze, picked out the carrots in the pile and dropped them, one by one, off the side of the high chair.  Systematically and with little fanfare, he removed the offending veggies to the floor and proceeded to then take one of the peaches and eat it.

Look out, Yosemite, there’s new Sheriff in town.  And it ain’t Mommy.

I spent the next few years in Toddler Feeding Hell and aside from much kicking and screaming (on my part), I don’t have any words of wisdom to offer.  There were tears over steamed green beans, face offs over broccoli and someday if I have the strength, I’ll have to write about The Great Uneaten Dinner Escapade of 2007.  Suffice it to say, I had to concede the battles for three straight years to win the war.  And, I’m happy to report, both warring factions came to a peace treaty and there were no prisoners taken.  Well, Elmo was held hostage but that was in the interest of eating protein.  You understand.

Now, if you’ll excuse me, I have to go cut the crusts off the PB&J, peel and quarter grapes into sixteenths, remove lima beans from the frozen mixed vegetables and make sure the yogurt I bought is blended, no seeds, and NOT blackberry.

I am The Keeper of The Fruit Loops, Driver of The People Mover and Manager of The Fecal Roster.  In other words, I’m a mom.  An Erma Bombeck Martha Stewart with a Roseanne Barr twist, I have the organized cabinets and mouth to prove it.  I live in Pennsylvania with my ever budget conscious husband, two blog inspiring Fruit Loops and my extensive collection of thrift shop finds.  When I’m not writing, I can be found running marathons, governing the PTA like nobody’s business and pinning things on Pinterest like it’s my job.  You can find me on Facebook, Twitter and in the smash hit books “I Just Want To Be Alone” and “Scary Mommy’s Guide To Surviving The Holidays“.   For more information about Christine Burke, check out her website Keeper of the Fruit Loops: www.keeperofthefruitloops.com.