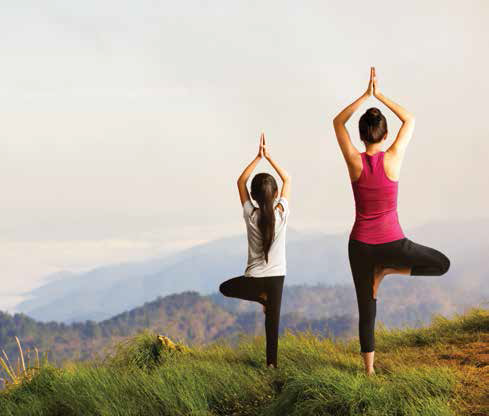 How to Get the Deepest Rest of All Many of us are tired or burned out, here’s how to restore ourselves for good.

I recently became a mother (a year and a half ago, to be exact). Before that, I was busy: writing a book and articles, working full-time at Stanford’s Center for Compassion and Altruism Research and Education, volunteering up to 20 hours a week teaching yoga-based breathing to veterans with trauma, not to mention reading, yoga, and friends. I loved creating above everything else: letting inspiration alight and sitting down to bring my thoughts to life. And then little Michael came along. My heart was full of love and gratitude—I cried tears of joy nearly daily.

Yet I also noticed something else. My productivity decreased by 95 percent. I was keeping a baby alive, warm, fed, and rested, of course, but nothing was getting accomplished. I was lucky if I got a shower and a short meditation. Hours upon hours were spent breast-feeding and taking care of an adorable and highly vulnerable little man. My heart felt full, but my mind was going crazy. I was so used to getting things done. I would have writing ideas come to my mind, things that I needed or wanted to do. I would long to complete them. Yet I simply, realistically could not do them. The experience of spending a whole day without any end product was unbearable.

Slowly, as the months went by, I started to realize something else: the countless hours spent sitting with Michael, watching him play, and entertaining him were precious. Not only because they would never come again and time was moving so fast, but also because they were an opportunity to rest deeply—and in so doing, take a vacation from my own mind.

My mother shared something very beautiful with me during my early motherhood. She said, “The greatest thing a mother can do for her child is to rest within herself.” I would argue that the greatest thing we can do for anyone, and most of all ourselves, is to learn to rest within ourselves. To disconnect from the franticness of trying to get things done, of the worries and the what ifs (which after all are only figments of our imagination). To disconnect from the need to do. So we can be. This is not a new idea, it’s one we’ve heard before, yet in our über-productive society, being has become harder than ever.

When we think of taking a vacation, we think of heading to the beach or the countryside. There’s this idea that if we could just get away, then everything would be OK.

And yet, as Jon Kabat-Zinn has put it so well, “Wherever you go, there you are.” You could be basking in the sun with nothing to do, yet be caught up in a stream of anxious or angry thoughts. As Sri Sri Ravi Shankar puts so simply, the state of our mind determines the state of our life—whether we’re in the middle of a traffic jam on the commute to work, or on a boat in the Mediterranean, if our mind is OK, everything is OK. The only “real” vacation is when your mind is at peace. There is a sense of abundance and gratitude that naturally spills over into generosity and kindness to others. When our mind is in this place, we feel at our best.

So how do we do we learn to vacation our mind?

Countless meditation teachers have told us to “be here now,” to “enter the state of no-thoughts,” and to “be present.” Yeah, well, that’s hard to do, as anyone who has tried meditation will tell you.

In my 20s, I lived in Shanghai for two years, renting a room from an elderly Chinese gentleman. He was extremely erudite, a well-known biochemistry professor and inventor. He was also the happiest man I’d ever met. Despite the tragedy of his personal history—including the death of his wife during the Chinese Cultural Revolution—he bubbled over with happiness, humor, and childlike joy. Not to mention a deep sense of peace. I was 22 and prone to stress stomachaches. During one of these episodes, he told me, “Why don’t you just sit there, on the sofa, and look outside at the bamboo. Just relax.” I realize now that he was teaching me to meditate, though it didn’t look like the formal meditation practice we think of today (sit with eyes closed, a straight spine, preferably in lotus). But what he was telling me was to rest within myself—as he seemed to be doing every blissful moment of his days.

What I have found, through motherhood, is that simply being present without a goal is infinitely nourishing. By allowing my mind to rest without accomplishing, accepting that I could do nothing else, and in a state of complete surrender, I started to feel a deep sense of peace. I also realized that this sense of peace, of letting go, of just being, with no goal, was the state that my meditation teachers had spoken about. It was the point of those weeklong meditation retreats I had attended. It’s not so much meditation that is the goal, I realized, but the state of mind that emerges from it.

Ironically, perhaps, when I did start working again, I found myself more productive.

Emma Seppälä, Ph.D is Science Director of Stanford University’s Center for Compassion and Altruism Research and Education and is the author of The Happiness Track (HarperOne, 2016). She is also Co-Director of the Yale College Emotional Intelligence Project at the Yale Center for Emotional Intelligence. She is a frequent contributor to Harvard Business Review, Psychology Today, Huffington Post, and Scientific American Mind. She is the founder and editor-in-chief of Fulfillment Daily, a popular news site dedicated to the science of happiness.

Her work and research have been featured in The New York Times, The Washington Post, The Chicago Tribune, The Boston Globe, The Atlantic, VOGUE, ELLE, CBSNews, Oprah Magazine, Fast Company, U.S. World and News Report, Forbes, Cosmopolitan, Inc, Huffington Post, ABC News, Business Insider, SELF, GLAMOUR. She has appeared several times on Good Morning America. She was also interviewed for Huffington Post Live and TIME/MONEY and is featured in the documentary film The Altruism Revolution.

She is the recipient of a number of research grants and service awards including the James W. Lyons Award from Stanford University for founding Stanford’s first academic class on the psychology of happiness and teaching many well-being programs for Stanford students.

She graduated from Yale (BA), Columbia (MA), and Stanford (PhD). Originally from Paris, France, she is a native speaker of French, English, and German.