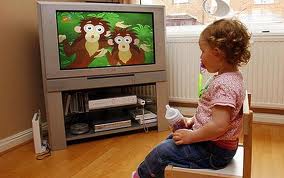 How Much Television is Okay?

The American Academy of Pediatrics has issued a statement that children under the age of two years should not be exposed to any television. That includes television labeled as educational. They state that the best way to make your child develop is through interaction with adults and other children, and I agree with them. However, I also look at reality. It is impossible to get chores done around the house without some sort of distraction for your child in a safe environment. If your baby or child is distracting you, or demanding attention by hanging on you, some serious injuries could occur. The same reality applies to a child care situation where children of various ages are involved.

The best environment for optimum development is through one-on-one care with a loving and communicative person – a relationship that will benefit children of all ages. The most critical age for emotional and social interactions to be established is in the first two years of age. This time period also forms the basis of how a child learns. Exchanges between parent and child are far more advantageous than watching a talking head or dancing body on a screen. Be aware that infants and children will connect with the characters on the screen. It can be cute to see your toddler dancing around to the music playing or singing the song on TV, but cute as this is, imitating what’s on TV is patterning for behaviors later in life.

Multiple studies have shown that television and video games have negative effects on children’s behavior, socialization skills, concentration abilities, and overall physical health. Actions on TV tend to become a source of what is right and wrong, with a higher acceptance level than that seen in movie theaters. When experienced repeatedly, violence from television and video games in the home has a far greater imprint on the brain than a onetime big screen viewing. And the time spent at home watching TV or playing video games is increasing dramatically. This one-on-one lifestyle with an electronic instrument has the potential to eliminate social interaction, alter mental attitudes toward various behaviors, and interfere with school readiness.

If that isn’t enough, sitting still staring at a screen or using a hand-held controller for video games removes physical exercise from your child’s life. And what fun is being in front of a TV without some food to munch on and a soda? That’s the start of becoming overweight. Finally, your budget and eating habits change due to the less than nutritious foods advertised and the toys and clothes your child must have since everyone else has them.

So what can you do? The biggest change you can make is planning more family time (and that doesn’t mean around the TV set). The adults in the house should also set rules about what types of programs and games are allowed and have consequences if the rules are not followed. Simple?…Hardly.

Bruce is the managing partner of Livermore-Pleasanton-San Ramon Pediatrics Group. He is a Board Certified practicing pediatrician with over 30 years of experience caring for children. He has served on numerous committees dealing with child health and development.  www.livermorepleasantonpeds.com