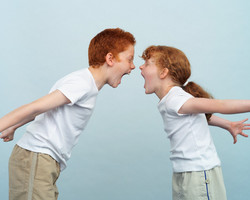 If you have more than one child, you are probably fairly familiar with sibling squabbles. If one child has a toy, no doubt the other one wants it. It’s especially hard with smaller children; the youngest instantly craves what the older sibling possesses, no matter how big or small. So what do you do when they start to make fun and call each other names?  How do you handle the oh-so-common fights over who gets the red, yellow, or pink crayon—the one that isn’t broken yet? How do you deal if one child thinks the other got a better fire truck or a prettier princess dress?

Let’s take four common scenarios one at a time and look at some options for diffusing sibling rivalry.

Your three-year-old and your five-year-old are fighting over a toy. It may not even be a favorite, but the second the younger child takes it, the older one simply must have it.

A couple of weeks after you bring your new baby home from the hospital, your older child begins to show signs of jealousy. He begins to regress, asking for a bottle, wanting to be held constantly, slapping or biting the baby on occasion.

When kids are young, it’s easier to solve these sibling rivalries. But when they get older, the issues get more complicated and there isn’t a simple solution for each incident. That’s why it’s important to prepare your family and your kids in advance. Teach them when they’re young and before the situation arises so they have already learned to support each other instead of making fun of each other. Then when something comes up, it becomes another opportunity to reinforce caring, compassion and learning to deal with failure, disappointment and delayed gratification.