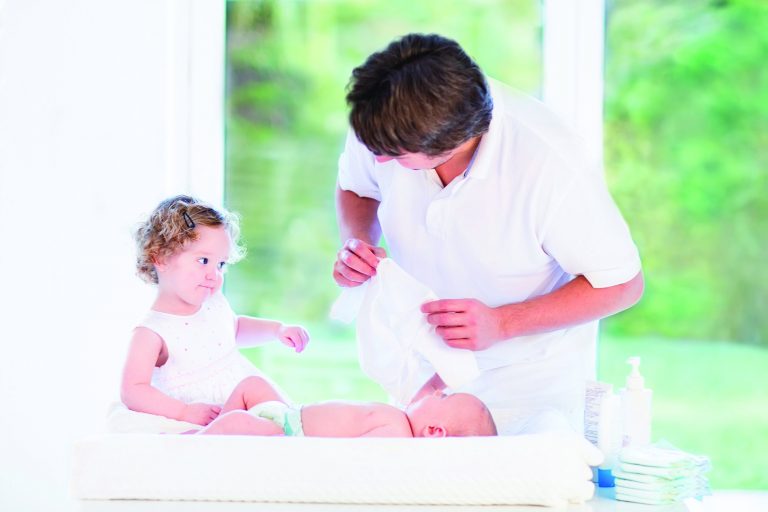 A common complaint of couples that come to my office for counseling after becoming parents is a lackluster sex life, typically a decline in the frequency and quality of their lovemaking.

Becoming a parent has many joys, but a great sex life is often not one of them.

From balancing work schedules with carpools and after-school activities, to the evening hustle of getting dinner on the table and the kids to bed, many parents have little time or energy left for intimacy. Relationships are also strained by other factors, such as the added financial pressures that come with having kids, and disagreements about parenting styles. So couples expect me to ask them about things like desire, conflict, and communication.

Which I do, but I’ve recently taken to asking about something else first, a question that often takes them by surprise: Who does the diapers?

This may seem like a trivial detail of family life, but recent research shows that heterosexual parents who split childcare duties evenly have the best sex lives, as measured by both frequency and quality of sex. These couples also have the most satisfying relationships in general, results that mirror another study showing that couples who split household chores report better relationships.

These three groups were compared with each other in terms of frequency of sex, quality of sex, and overall relationship quality. Couples who shared childcare responsibilities reported the best sex lives and the most satisfying relationships.

Notably, the couples that reported the lowest-quality sex life and relationship were the ones in which the mother did the lion’s share of childcare tasks.

According to one of the study’s authors, “One of the most important findings is that the only childcare arrangement that appears really problematic for the quality of both a couple’s relationship and sex life is when the woman does most or all of the childcare.”

This research does not tell us why couples that share childcare duties have better sex lives, but as a psychologist who works extensively with couples and parents, my clinical experience suggests that a primary reason is this: Good sex in a committed relationship is facilitated by emotional intimacy. Emotional intimacy can’t happen when one partner feels that his or her needs are taking a back seat more often than not.

For example, if Dad typically comes home from work and plops down on the couch while Mom makes dinner and corrals the kids—after her own day of full-time work at the office or at home with the kids—this pattern over time is likely to create resentment and emotional distance.

Emotional distance is a sex-killer in a relationship.

Yes, Dad is tired and needs a break, and so does Mom. Taking care of children can be tedious and exhausting; there’s no way around that.

However, when one person in a relationship is regularly not pitching in on the shared project of child-rearing, that lack of participation can erode the critical sense of “we’re in this together” that underpins a satisfying relationship.

In contrast, when both parents treat raising kids as a shared project with shared responsibilities, they are more likely to see their relationship as a true partnership with give and take. This, in turn, supports emotional intimacy, and emotional intimacy supports good sex.

Couples whose sex life has suffered since becoming parents can begin by looking at how they share the work of parenting.

Talk candidly about the situation and strive to find ways to create more balance in your childcare responsibilities. This can be difficult, especially for couples who have become entrenched in a routine, even if that routine is not working well for both individuals; for example, Dad habitually watches TV or works while Mom cooks or cleans up. (I realize that example sounds like a stereotype, but research shows it statistically reflects the current reality of gender roles).

If you are the one in the relationship that is regularly doing the majority of childcare, resist the temptation to point the finger at your partner. While your partner is also responsible for the current state of affairs, it is equally important to ask yourself what role you may play in contributing to the current situation.

For example, one mother that I worked with realized that she did most of the childcare because she didn’t like how her husband did things: “If I let him give the kids a bath, he always forgets something, like washing their hair or under their nails. If he’s in charge of getting them dressed in the morning, nothing matches and the kids look like ragamuffins.”

If this woman’s perspective sounds familiar, ask yourself whether you can be more flexible in your standards. Is maintaining them worth the trade-off in time, aggravation, and relationship strain, or is there room for compromise? There is no right answer here, just the recognition that we ourselves play a role in what happens in our relationships.

Changing diapers might seem like a chore that has nothing to do with sex or intimacy, but what it represents—partnership, caring, collaboration—are the cornerstones of a strong and satisfying relationship.

Bio:
Dr. Erica Reischer is a psychologist, author, and parent educator. In addition to her Oakland-based private practice, she writes for The New York Times, The Washington Post, Psychology Today, and The Atlantic. She is the author of What Great Parents Do: 75 Simple Strategies for Raising Kids Who Thrive.